Levitating Moon Lamp is becoming popular recently. There are close to 100 sellers on Amazon and independent e-commerce stores. Considering it is an expensive niche segment, the choices are dazzling.
Some stores sell variations of it, such as other planets, or with more color choices. Some even come with remote control. The cheap ones don’t levitate, so it is only a moon lamp. The expensive ones have a magnetic wooden base making the operation convenient.
So, what is a Levitating Moon Lamp? How does it work? What are the options and features the Levitating Moon Lamp has? This blog explains everything you need to know about the Levitating Moon Lamp.

The Levitating Moon Lamp is sometimes called Floating Moon Lamp. As the name implies, it is a light in the shape of the Moon, which levitates above the base.
The base transfers electric energy to the light globe. It supports it with magnetic force. Nowadays, the base is as small as 3″x3″x1″ and still supports up to 300g.
The base looks like a wooden stand, but it is usually plastic. It looks fantastic with a warm white and yellow levitation lamp in the shape of a moon. We can achieve the goal of having a 7″ globe that still weighs less than 300g, thanks to 3D printing technology.

How does it work?

We are not going into technical details. We all learned the basic theory in school. The electric current creates a magnetic field. The same polarity will repel each other, so the force would make the light levitate in the air.
The base must plug into a power cord to create the magnetic force. It then sends power to the globe to levitate and light up.

There’s a saying that talking about toxicity without the dose is meaningless. Magnetic is everywhere. Earth itself is a vast magnetic planet. But the magnetic field that the earth produces is minimal.
The Levitating Moon Lamp found on the internet today is generally safe. The magnetic field it creates is minimal, a few inches away.

It is arguable. Yet, people recorded the idea of magnetic levitation  200 years ago. The product of Levitating Moon Lamp was available only until recent years.
A couple of individuals or e-commerce stores claim that they were the ones who invented it. Still, considering how rumors spread since the internet existed, there’s no way to prove it.

What does it do?

Well, it is a lamp, without a shade, illuminating around 5 feet of the surrounding area. It can act as a night light in the corner of the room. Besides, it captures eyes and provides an endless source of creativity.
It does not only float and spin but also creates an illusion of outer space in the photos. Our staff posted tons of pictures and short videos with this lamp.

What features does it usually have?

Most Levitating Moon Lamp found online, including Amazon, only has limited features. It is, as it says, a Levitating Moon Lamp. Some stores offer an upgraded base, making levitating easier. Others offer more colors to the lamp, even including remote control.
Some even provide a giant Moon, which looks fantastic. Once you have seen the larger one, you never want to have the smaller ones.

What is it anyway?

After learning all features of a Levitating Moon Lamp, you may find out it isn’t only a lamp. It is a combination of art and technology.
It grabs the attention of your guests and those passing by. It inspires creativity, brings topics, and acts as an ice breaker. Few lamps can do that.

Where to get it?

You can buy one from Amazon or other e-commerce stores. But you may find it dazzling across stores. Even on Amazon, you may find hundreds of listings.
We have another blog post, “Buyer’s Guide of Levitating Moon Lamp” to save you time. It compares the features, specifications, price, shipping, and return policy.

How much does it cost?

Anywhere from $80 to $359. Most are $140-$180. The price difference is usually due to profit margins. Please read our blog “Buyer’s Guide of Levitating Moon Lamp” for a detailed comparison.

The Levitating Moon Lamp adds a postmodern atmosphere to your home or office. It brings a topic to people nearby. It also inspires creativity and is a fantastic savior to dull settings. 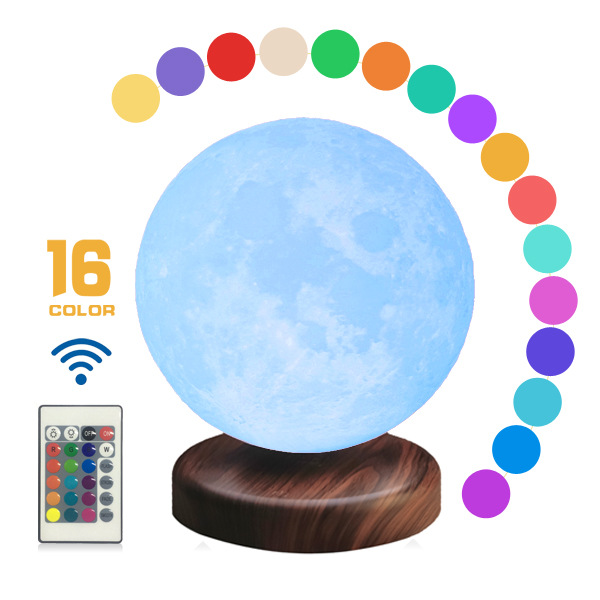